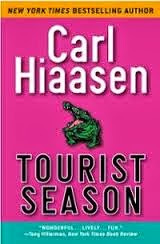 No, not that rhyme, but words – a lot of words -  certainly came knocking one night recently.

I spent almost a whole night awake reading Carl Hiassen’s first novel, “Tourist Season”. That man can be a compelling writer. I’ve read a Hiassen before so I really should have known better than to open up those pages at bedtime. But I did. Alas!

If you've never come across his books, Hiaasen writes with a witty and gently mocking sympathy for the pain that life brings to people, or that people bring on themselves.


His "Everglades at the max" adventures usually circle around a crime or two - often gruesome - plus a lost but loveable under-dog hero, a lively but not-to-be intimidated girl and a host of eccentrics with the best or worst of intentions. Alongside the danger, violence and entertainment, Hiassen’s message was clear even back in 1992, when this book was published. Damage was being done to the Florida eco-systems by thoughtless development, laziness and greed. An eco message is the steely core within a Hiassen romp and makes his books a bit more than airport fiction.

But back to here and now and Word Turning, with me bumbling about on my Procrastination Masters again.
What exactly was the special Hiassen wisdom I spotted?
Why I am I mentioning his writing, other than in connection with the bags under my eyes?

Here is is, with words straight from page 12.
Imagine the scene: Wiley, an old newspaper editor, is talking to a clueless writer about the column he’s just submitted.

“Here we go again, Mr Journalism School.” Wiley was gnawing his lower lip, a habit manifested when he composed a news story. “You got some good details in here. The red Royal Tourister. The black Raybans. That’s good. Why don’t you toss out the rest of this shit and move the juicy stuff up top? Do your reader a favour for once. Don’t make ‘em go on a scavenger hunt for the goodies.”

Re-read those last sentences.
“Do your reader a favour for once. Don’t make ‘em go on a scavenger hunt for the goodies.”

Gulp! I am one given to too much scavenger hunt writing. I love turning over words,  I like playing with language, enjoy expanding on a setting or describing a character, smile when I slip in a coy reference. I tend to take my time. Words? It's just possible I use too many of the damn things.

Hiassen, coming from a journalism background, doesn't. He writes so that his story reads swiftly and sharply. He doesn’t hang around, blocking the plot with sensitive, “creative” descriptions. You want a story? You got a story!

Note I'm not talking about my writing “voice”here. I don’t want to write “Hiassen” and my story wouldn’t suit “Hiassen”. I am talking about the need to edit, rehape, cut - and the writer’s responsibility to the reader, especially the young reader.

Okay. So I’m off to hack through my over-written Work in Progress. I may lose some overhanging phrases, even some beautiful ones. I will slash away some wordy undergrowth. There could be slaughter and the quiet disposal of unwanted characters. And maybe this will make my story better. Maybe.

Ssssh! Off I go, into the wilderness of words. I may be some time.

THE VOICE FROM THE BACKSEAT or THE BLOG BEGINS. Penny Dolan 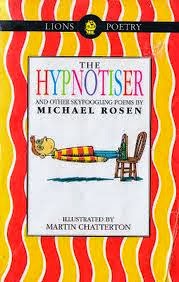 Rosen is writing in his "about my family" voice, retelling a familiar situation - though from before the days of in-car entertainment – and it's one that children and parents enjoy recognising.

As you’d expect, it's about a car journey. Mum is driving and two brothers are squabbling in the back. The two bored boys say things to get her attention and get the other into trouble.

The bothered mum amuses them, threats them, takes firm action, and then - the poem implies - the voices in the back start up again.

The poem is mostly dialogue: Mum and the kid's voices from the back seat, but I've often used it as a starter for a class poem about a school event or outing.

Mum says:
Right you two. This is a very long car journey.
I want you two to be good.
I’m driving
and I can’t drive properly if you two go mad in the back.
And we say, OK mum, OK. Don’t worry.
And off we go.
And we start the Moaning . . .

Something similar – although not in this exact way - happens to me.  I've decided the voices from the back seat are my occupational hazard.

Here’s how it works. Often, while reading fiction or watching tv or a film drama, I think: Right. This is a very long story and I want to relax and really enjoy it.

Then the small voice in my head starts up. Not two bothersome boys but my internal “writer” voice. "Now x could be coming next - but is it more likely y will happen? Or are we being set up for? . . . it goes. On and on.

The plot sticks a head out of the cupboard and starts murmuring “I’m going to do this. Or that. Or am I? Did you notice that bit of foreshadowing?” The plot options flip  like a rolodex rotating in the brain, slowing at this twist or that turn and impossible to stop.

There are good moments and less annoying times. Suddenly a word or phrase or an image sings out from a page, an interesting object appears, an amazing fact pops into view and my mind starts chattering again. "What if? Now that would be fascinating to use. Should I scribble the words down?" I reach for the pad that's always beside me and scribble a word or two. With luck, I’ll put that fragment of an idea into the box by my desk.

So my WORDTURNING blog is really about those sparks, those moments when something pops into the head, and the writing mind, like Burglar Bill, says "I'll have that." Or, like Blind Pew, delivers the unwelcome Black Spot.

“Sure about this blog?” says that other too-knowing voice from the back seat. “You know you’re always procrastinating? Enough to be doing a Masters in it?.Will writing a blog about writing really help the situation?  Remember that tome-in-progress, eh? Shouldn't we be nearly there by now?"

Live in hope, I answer. Today's an optimistic day.
It's definitely a very occasional blog and it's only just beginning.

"Hmm. Under construction more like," a glum voice mutters.

Here’s the great Michael Rosen. He has video-recorded all the poems from his collection, The Hypnotiser”, and put them online as a learning resource. Such an enjoyable idea.

Penny Dolan
Hello! I'm a published children's writer and storyteller, ready to blog about the random words and gathered phrases that make me muse about the art & craft of writing, together with odd glimpses into an author's life.